After lunch at the Bull in Ashford-in-the-Water (recommended) and completing a few chores got down to the willow pool at about 1530. It was rather dull and quite breezy so wasn't expecting too much. Tackled up with a small olive  nymph (D-Rib) which had a bit of lead underneath to get it down a bit. I started at the bottom of the pool and on about the second cast connected with a good brown which was soon landed, it was perfect with large red and black spots, about 1.5 lb. There were some mayflies about so I changed tack and put on a mayfly nymph and immediately took another brown followed closely by a rainbow, both in the 1.5 to 2lb class. I worked my way up the pool and took 3 more browns, that was 6 fish in 60 minutes. There was only the odd fish rising and I noticed that some appeared to be rising in the same position,hmmmm. So on went a grey-olive paradun as there were some small olives about, couldn't identify them at the time but on investigation later I think they may have been medium olives or small dark olives. I covered a few of the rising fish but nothing. Then a few mayflies got hammered by the risers so I had to switch to a 1 up 1 down mayfly (Phil Whites - my most successful mayfly) I covered a couple of the risers and took a couple more good browns before heading to the hut for a warming coffee. The water is still quite cold and I had my neoprenes on too. Anyway after a coffee I decided to have a last couple of casts with a mayfly nymph. There were some sedge about and loads of LDOs and the small olive mentioned previously.  As I was moving up the pool I spotted a very large fish right on the bottom only 8-9 feet away, I dropped my nymph to try and elicit a response but nothing, I tried a couple of times then I had a follow from a monster so much so that my first thought and I may have said it out loud was, "Oh god please DON'T take!".  I couldn't believe what I had seen and said but it gave me such a shock to see it that it was my first reaction, I had a little chuckle to myself! It was obviously one of Matthews pets from the children's farm up at Chatsworth that had outgrown the ponds up there. Anyway called it a day at 1800 after that as had a really good session.

Didn't take any photos as camera is in dock at Nikon, I seem to be having a few problems with gear at the moment! Nikon though won't be as forthcoming with the customer service as Orvis or Sage, quoted £161 to fix it!
Posted by Baslowfisher at 22:16:00 2 comments:

Receive a replacement tip for my Sage SLT on Friday. Yet another example of excellent customer service. Many thanks to Gary Coxon for sorting it out in super quick time. Sage rods may be towards the top end of the spectrum but when customer service is this good the extra expeanse is worth it.
Posted by Baslowfisher at 21:46:00 1 comment:

Took my leaking waders back to Orvis in Bakewell last Saturday and the ladies immediately checked their stock to replace them without question. A pair was located in Banchory and a phone call resulted in them being sent to me which I will receive on Thursday. It would have been Tuesday but I was at work when the the carrier tried to deliver. Exceptional customer service and experience, thank you Orvis.

I am now in the market for a replacement pair of wading boots with rubber soles as have to try and stop the spread of disease and any invasive species, No question where I will be going!

The Perils of Not Taking a Spare Rod With You

I went fishing on Saturday with my son Adam. The prospects were not looking good as it was very windy and lots of showers so I was not confident. We went down to the works as I expected it would be out of the wind a bit but unfortunatley as it was gusting there was nowhere to get out of it. On the way down I caught my rod in a tree branch and before I knew it I now had a 5 piece rod, brilliant! I had not taken a spare with me so persevered with an 8' 6" instead. Anyway Adam started at the sycamore pool and I started a bit below we were both using fox squirrel nymphs in olive and natural. It wasn't long before I could see Adam into a fish, result! I was soon into a nice brown too. Adam worked his way up the pool but I was stuck as were I got in it was very limiting due to the depth. I could see he was soon into other fish so I was at least glad he was making progress as he doesn't come with me regularly so its good to see him connect. He was working his way up so I moved and followed him up before I had taken a few more. There was only the odd fish rising and nothing regularly so switching to a dry was not worth it until I got to reach the trees were I decided to try a foam beetle. I covered the odd fish and hey-presto up they came a took the beetle. I ended up with 7 fish by lunchtime and Adam ended with 6 so a good few hours to start. 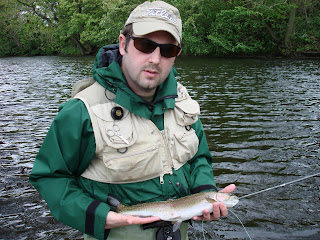 After lunch we went doen to the Willow pool and Adam immediately started hitting the fish, he had changed to a myfly nymph as I had spotted a couple of mayflies and John the bailiff had said earlier that there was a good amount of mayfly nymphs been seen moving about recently. I had also switched to a maylfy nymph and started to pick up the odd brown and rainbow, some up to 3lbs. I could see Adam had hit a few good fish but they came unstuck until he eventually landed a real cracker knocking on 4lb. We continued up the pool and back down into the pool below. Adam was picking up fish here and there, a good mix of browns, rainbows and grayling. By 4pm the weather was decidedly inclement and so we slunck off to the hut for a quick cuppa before the heavens opened. We stayed there until it stopped raining and I could see he was eager to have a last 30 mins. He picked up a few more including this cracker which went to 4-14. 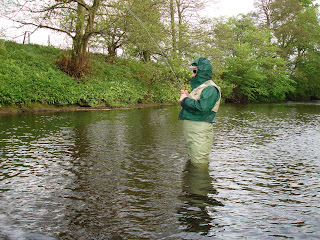 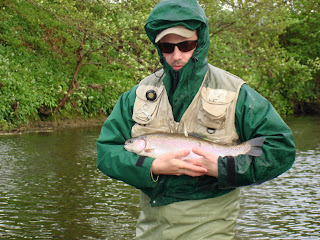 We ended the day at 5 both getting well into double figures, I was glad that he had had a really good day. Me well I now had a 5 piece rod and to cap it all my new waders had started leaking!
Posted by Baslowfisher at 22:11:00 6 comments: 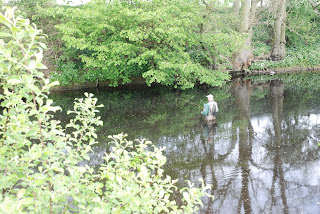 This is my first outing for a week or two due to hurting my back doing some gardening. After getting a report from Derek about his and Don's session on the Derwent yesterday above the works I made plans to meet Derek around 2 at the same venue. It had started sunny in the morning and after a hasty lunch I got down to the car park about 1.30. It was still sunny and I tackled up with a hawthorn fly as Derek had reported quite a few about yesterday. I decided to go down to the sycamore pool and got in just below. On my 2nd or 3rd cast I watched a brown swim up to my fly and engulf it. I resisted a quick strike and gave it a second or two then struck and he was on! Unfortunately not for long. I persisted with the hawthorn and 2 more fish rose to it and again they came unstuck! I thought it was going to be one of those days. Derek appeared and got in above me and immediately took a few to a large black klink. I spent quite sometime covering fish chopping and changing flies but could not get them to take anything so moved above Derek into the faster water where I broke my duck and took a grayling to a black klink. I then moved back below Derek and by now the temperature was dropping and had clouded over, only the occasional fish rose so I changed to an olive d-rib nymph and took a rainbow. Fish suddenly started rising again so a quick change to a grey olive parachute, then a yellow parachute but nothing, zero, nowt, zilch! Not to be thwarted I decide to break out the micro's and went for  size 32 black parachute and on the second cast a rather large rainbow took and was all over the place before straightening the tiny hook and was gone. That was my cue to call it a day as I was beginning to feel the cold. Just after I got home there was a much needed shower but hardly enough to wet the ground, hopefully more will be on the way as the river is showing its bones now.
As there wasn't much to photograph I thought I would add a couple of shots of the bluebell walk from a week or two back. 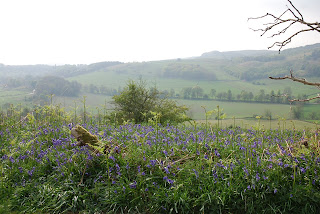 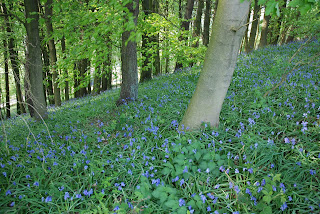