I was in Bakewell on Saturday and visited our trusty servant namely The Flyfishing Shop and Peter Arfield for a chin wag. He has recently started to sell Tenkara equipment and in the course of our chat he mentioned that he rents out rods for people to try. Naturally I had to "have a go" so duly paid my rental of £10 English pounds. The rod wa a 13 or 15 foot rod with a furles leader and a 6x tippet. Now I have read a few recent articles about this type of flyfishing but after a quick demo in the courtyard from Peter I was on my way. In the evening I decided to go down to the lunch hut at Beeley as there are some riffles and runs there. I got down around 1900 and there was the odd fish rising here and there. At first it was difficult to get the line out, the usual heap ensued however after a bit of perseverance I could throw a decent lob. I was fishing fairly close in which I think is the general idea. I had on my greyolive parachute and after about 20 mins hooked into my 1st fish, a healthy wild brownie, things were looking good. I was getting the hang of it but couldn't get any fish to take again so I thought I would try a PTN with a copper bead. Again I was into my 2nd fish a lovely grayling. The pool and run I was fishing were too wide to fish towards the trees at the far side, 1st limitation of this. I managed to work my way to a suitable spot just below a rising fish and within probaly fifteen feet, by now I had changed to my trusty rusty and covered the fish and on about the 3rd or 4th pass up it came. It was this pass that the fly came down drag free so I was obviously doing something wrong on the other attempts. I was finding it difficult keeping the furled leader off the surface, my cast was about 2 feet so don't know if  that was enough. This was a larger brownie around 12-14 inches so lead me a merry dance but I eventually managed to land it. I continued in the same vein and finished around 2145 with another 4 browns and a grayling making 8 fish in all. Not bad for a 1st attempt. Was I convinced at the effectiveness of Tenkara? The jury is still out. 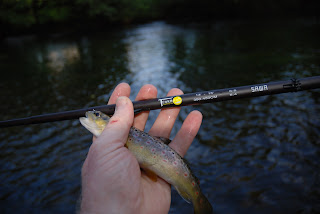 A 1st for the Tenkara

So on Sunday evening I decided to retry the experiment and went into the Park around 1930. The weather had been showery during the afternoon but even though the sun was out the temperature was on the parky side necessitating a fleece. Fly life was almost non existent so I decided to try some of the Blue  Ribbon flies I had tied during the winter and on went a sparkle dun with an amber body. I went down to the stump area where I knew there was some faster water where I could get close in. On my 2nd or 3rd cast where there is nearly always a grayling I hooked into one and landed it, brilliant! A 2nd fish started to show in the same spot and this also eventually took when I managed to get a drag free drift however disaster! The fish was a good grayling as I saw it on the surface but it pinged the fly off pretty quickly as I couldn't follow it quick enough downstream. I hate that happening. On went another sparkle dun the twin of the 1st and the same thing happened again when a decent brown took, another fly stuck in a fish. That was 2 more than I had lost in fish all season so far! Hmmm not impressed! I changed the cast to 3.2lb point instead and attached a rusty spinner. Nothing much was showing and it was only 2100 however a brown decided it was too good to leave and took it which I gingerly landed. Enough was enough now and I called it an evening as I was getting chilled. Would I buy a Tenkara rod? Not for the Derwent I think. In my opinion, and it is only my opinion, it is not the right rod for the Derwent maybe the Dove or the Wye? I remain to be convinvced and I know there are probably hundreds of people out there who enjoy it, I know a few but I don't think its for me.

As I am not far from Bakewell I nipped into town to see if anybody was fishing there and Mick was worrying the Wye population with a PPS. Richard was also upstream. Fish were rising well on the Wye and had been all day. It's mazing the difference a mile or two makes. After having a chat we all went our separate ways when the heavens opened.﻿
Posted by Baslowfisher at 19:05:00 1 comment:

After finishing work a bit late I arranged to meet Derek above the works asap. It wasn't until 2015 that I got down there only to find I had left my reel and flyboxes at home! A false start, too eager to get out as it's been over a month since I have been fishing. I found Derek ensconced in the sycamore pool so I got in just above him to work my way up. After the glorious day the temperature was still reasonable on the bank but down below the trees it was decidedly chilly. Sedge and spinners were about but not what I expected. On went my rusty spinner and immediatley had a take but I was also rusty and struck too soon only pricking the fish. I worked my way under the trees and next time I delayed the strike to land a lovley brown of about 15 inches. Following another couple of long distance releases the fish stopped rising about 2130 so we called it a day after only 45 mins of fishing. As we made our way back to the car we realised that if we had gone into the park we would probably have had another 30 miniutes of fishing time and it would probably have been warmer in the open however during the day the park and river was full of dogs and children so the fish would probably have disappeared. Hey ho!

Have acquired some more materials for tying up some saltwater flies for my trip down to North Devon in a couple of weeks time. Any suggestions as good locations around the Porlock area or river fishing around Exford would be appreciated.
Posted by Baslowfisher at 09:50:00 No comments: