Was That It Then?

No sooner had we come out of lockdown when the rivers opened than it was the end of the season. September continued to offer pretty poor evenings to fish the last couple of hours with very little activity from both fish and insects. Temperatures were on the low side. I tended to fish more in the afternoons. One particular afternoon I went down to the bottom end, I was using my bamboo #5 weight. Usually as you progress up about half a mile fish can be picked off or raised with a neatly cast griffiths gnat or black gnat. I tried both these but could only muster a couple of browns. There just were not the insects about nor the usual rafts of weed. Afternoons spent by the works with Derek produced fish to terrestrials and small black gnats. Talking to the keeper about the issues he agreed that probably due to the biblical floods in February (highest in 50 years) this would have ripped out the weed and shifted many many tons of silt. One of the most amazing examples being down by the bottom hut were the bend just above which was very deep on the near side now has a dry silt area. Unfortunately the last days of the season was a washout with high levels.

So its on to the grayling, maybe a few hours on Thursday or Friday (16th). I will be able to christen (hopefully) my new Orvis Helios3 10'6" #3. I have been reading up on the Czech/French/high sticking practices, Paul Gaskell (discovertenkara.com) has just written a book which includes pieces on this method plus videos/tutorials about leader setup etc. I am in the midst of reading it and it is very informative. So onto the various "nymphing" methods with hopefully some dry fly on those clear days.

July and August - Something Happening To Our River?

July was an odd month, fishing was predominantly restricted to the evenings however what was expected to be lovely barmy evenings turned out to be mainly on the chilly side. Result:- little fly life about and even fewer rises but was there some other factor? There was one spectacular evening when it was warm and there was fly life everywhere, duns, spinners, caddis and midges. I had a very good evening catching  browns including a spectacular grown on brown between 5 and 6 pounds. This was a one off, the fish are there but this year there is a sad lack of weed in the river which naturally keeps the insect like down.

August was not much better, each outing resulted in fish being taken but the incredible hatches of previous years was not forthcoming. Why is this? I am to the only not the thinking this way too. How are clubs above and below Chatsworth fairing this season? 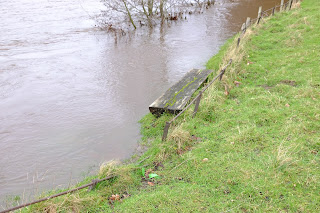 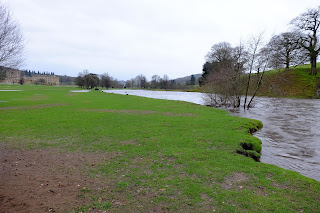 The floods of last February must have some effect on the river flora and fauna when you look at the above photos showing the flood it must be at least 10 feet above normal. The sheer power must have ripped up miles of weed, gravel thus remapping the river bed. I know there have been floods in the past but this year, well something extra has happened.

So onto September and the sunset of the season hopefully things will improve.

May and Back on The River!

Well it is 11 months since I last fished due to family illness and bereavement. So I was looking forward to getting back on the river after the lockdown was lifted for our fishery last Friday. I met up with Bill and Keith around 1030 at the bottom hut. They had already been in the river and snook a few fish. After the usual pleasantries I decided to go further downstream to see if anything was happening. The odd fish was showing with occasional mayfly coming off. Olives and black gnats too. My casting was a bit rusty after my lay-off but I soon got into my stride. I had decided on a black gnat as there were many around, I worked my up the pool but rises were few and far between here. Eventually a nice brown rose to my fly and a delay to my strike ensured a well hooked fish which was duly landed. As I progressed up the pool a couple of takes were missed so around 1 I reeled in and met up with the chaps for lunch. Lunch was one of Hancocks pork pies, still warm when I collected it too! Needless to say we soon demolished it. I also want to add that all this was accomplished with sensible social distancing, even cutting the pie was done without touching it. Following a leisurely lunch I was changing my fly and rested my rod against my car, I locked the car forgetting my rod was against the door mirror, needless to say it chopped the rod like a guillotine! At least with Sage rods it has a lifetime warranty however it was still going to cost £120 to fix it. Bill and Keith called it a day as they had been there since early doors. Luckily I had 1 of my bamboo rods with me so tackled up again and I went back to the pool I had half fished and carried on. I only successfully landed another brown so I called it a day after an hour, it was great to get out again after such a long break.

Last week I  had a couple of visits just over the road below Baslow Old Bridge. On Tuesday it had been such a warm day and lots of spinners in the garden too,  I had decided to use my bamboo rod a 7'10" #5, such a joy to use as a difference to the carbon rods. I had an olive cdc dun on and landed a nice brown from a run on the far side, always a tricky cast! Progressing up the pool I lost the fly in a decent fish and decided on a change to a griffiths gnat. Another brown followed by a rainbow around 2lbs completed a lovely couple of hours before dark.

The following evening I again went across the road to fish the pool below Baslow Old Bridge. The first fish was another cracking rainbow, fully finned and fighting fit around 2lbs. There then followed a first for me, I hooked into a fish which went wild, it turned out to be a blue trout and as it lay in my net I noticed a fly in its top lip. It was the fly I lost the previous evening to this fish, an olive cdc dun, obviously not affecting the fish's eating habits! I finished off the evening with a final brown to take my tally to 3.

On Sunday evening I went down to the bottom hut again, Derek had kindly lent me a rod to use. The pool above the hut looked inviting with plenty of fly about but nothing showing. I had on a black gnat  as there were many about. In the fast water my fly became waterlogged but whilst I was distracted by a couple of grey wagtails a fish tugged the fly and was on, sheer fluke. A cracking 2½lb rainbow was landed. I tried various other runs to no avail so went to the next pool down but first tried the fast water as I went, again I was distracted by something and the fly was take and a brown hooked itself, fluke number 2! I finished off with another brown from the next pool before calling it a day after an hour. I was feeling a bit vulnerable as there had been several instances of poaching on the river today together with numerous on the Wye and being alone down near the bottom without communication was un-nerving me. Usually it doesn't both me fishing alone but not this time!

May was a quick month fishing wise but a decent start to an unusual beginning. Wishing all my readers a safe and successful season and take care.
Posted by Baslowfisher at 20:16:00 2 comments: