Monday - Found a shoal of Grayling! (at last)

I just went over the road this afternoon for a few hours. I started off in the pool below Baslow old bridge where I usually pick up grayling in the summer and there are some nice runs and riffles. Today nothing was about. I worked my way across, up and down but zero! I was now on the far side  and as I worked down below the old ford connected with a decent grayling which became "detached". The next cast also connected and this time I landed a small grayling. I continued dropping my nymph into this area and nearly every pass a grayling had a go. I must have connected with about 15 grayling and managed to land about 7 or 8. This has not happened for me for ages, as mentioned in previous posts, where a shoal of grayling has been located. Unfortunately the river was carrying some colour so I could not see them. My nymph was probably fishing between a foot and two down so the fish were coming up for it. I spent a while taking these fish but what was interesting was that I had to change the nymph a few times as once a couple of fish had been hooked the nymph lost its appeal. Once the swim had gone dead I worked my way down the whole pool then back the other side without taking any other grayling until I was opposite the swim again but approaching from the other side, I picked up another couple of grayling before again the swim was finished. Not a bad couple of hours and definitely better than having to work, I am getting used to this retirement lark! 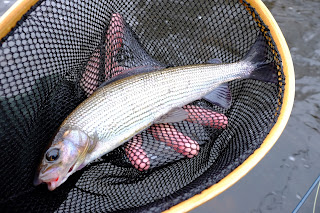