Today I paid another visit down to Mary's Bower again. Very overcast but the temperature was up and the Derwent was gin clear. I started off with a link and dink and immediately an dos trout had a go at the link but I left it  and it didn't hook up. The nymph was too heavy so I changed to a black spider with a 2mm pink bead. Eventually a grayling took hold and was duly landed to the nymph. I worked my way up the run and an dos trout took hold and was quickly released in the net without
being taken out of the river. The link wasn't doing anything so I put on couple of heavy nymphs instead. This had the desired effect and another couple of grayling soon followed. It was a struggle today as an upstream breeze got up and the temperature dropped. After trying by the stump without success I called it a day. Derek was also fishing upstream and he had 3 grayling too.
Posted by Baslowfisher at 19:31:00 No comments:

Wednesday 25th January - A Lovely Day after the Grayling! 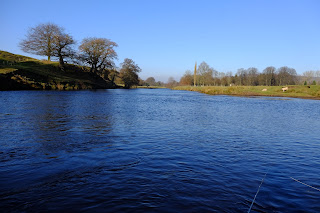 Well considering I retired at the end of last October this is the 1st outing since then! Not what I had planned but hey ho I have the new season to look forward to with certainly plenty of fishing pencilled in.

Today I planned to meet Derek at the cricket pitch in the park for a try for the grayling. As this was my 1st visit for months I wasn't feeling too confident. We started around 12 and the sun was shining and not a cloud in the sky, the early frost was gone and everything was lovely! I went down to the old stump pool and had on a couple of heavy nymphs, I was soon into grayling number 1 on the top dropper so at least they were prepared to come up for the nymph. A second had a long distance release before number 2 soon followed to the same nymph on the dropper. Things were looking good as both grayling had come from the same area of water. Was this a shoal, er no! I didn't hang around here and made my way up to the head pf the pool without anything further. It was great to be out, not many people in the park. A large herd of red deer minding their own business too was a bonus. 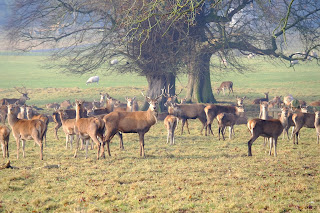 I then went down to Mary's Bower and started to work my way back as there is a good run of fast water which I thought the grayling would be looking for. I couldn't go wrong and picked up 6 more grayling all except 1 to the top dropper. What was interesting was that they were picked up in twos from the same area of water so not exactly shoaling but nearly!

I called it a day around 3 as the sun was dipping behind the hills and the temperature was dropping plus my feet were beginning to get cold, so 8 grayling landed. I will have to invest in some neoprene socks! A warming coffee back at the new hut and soon I was warm again but even the earlier success could not tempt me back in.