Started about 1330 just above the works, a hatch was underway, olives and grannom. fish rising here and there. started with a LDO and got a couple of rising browns, then a decent grayling. Sunny day and the grannom increased, managed to trap 1 and confirmed that they were sedge as it had the tell-tale green butt. Got back in just above the sycamore pool and worked way back up, managed a decent rainbow on an green sedge pupa, didn't have any dry sedge patterns on me, that will teach me! So put on a grey parachute, the nearest thing I had, raised and landed a rainbow.

A strange thing happened, I was up to my thighs and noticed 4 large perch at my feet absolutely still. So wondered if they would take a fly so put on a heavy hydropsyche adn dropped it at my feet and bang one of the perch had it, about 1 1/2lb! Now there were 3 so tried again and a second perch took this was bigger than the previous 1. So now 2 left and yes took a 3rd which must have been around 2lb! Needless to say number 4 was having none it now however a 5th perch joined him but whether it was one 1 had already caught well who knows?

Got 2 more rainbows before finishing at 1615, both to a sedge pupa. Overall a good afternoon and the first real warm day I have fished.

BTW can't get to grips with the formatting of this blog, it looks ok on preview but rubbish when published!
Posted by Baslowfisher at 18:44:00 No comments:

Decided to go over the road and below the new bridge and work my way back up. Started about 1730 till 1930, chilly breeze which dropped away. Numerous flies about, caught what I thought was a sedge but on closer inspection when I got home it was a stonefly as it had 4 wings, about the same size as a grannom. Few olives about. River now low and gin clear with lots of "snotty" stuff on the bottom, it needs a good flood to clear it out. Got 2 decent browns on a LDO dry and an out of season grayling and a rainbow on a black parachute. The rainbow had white edges to its fins and a tail like a spade, gorgeous! By the time I finished there was quite a lot of fly about, virtually an evening hatch but no fish rising by then.
Posted by Baslowfisher at 18:32:00 No comments:

Went into the park at 1300 and fished till 1530. Fish rising here and there even saw a few LDOs. Raised a few and landed a couple of browns on a LDO dry. Also got 1 on a "Nanas" fly. Whats that then? It basically a parachute fly with a muskwash body ( pale tan) with a dun hackle and coq de leon tail. But why Nanas fly, well the muskwash was from my Nans fur coat which was made into something else but there were several off-cuts going spare so not being 1 to let things go to waste! Needless to say it makes a superb body and dubs really well. Used a dark olive squirrel nymph but with an olive bead so had to take a picture to prove to David (I think his name is ) in the Orvis shop in Bakewell that they do work. Still a bit chilly but a glorious day in the park. Noticed a large water vole/rat by the stump pool, did not know what it was but it did have a tail so maybe a rat, who knows? 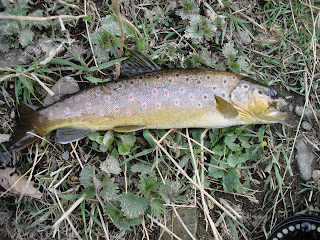 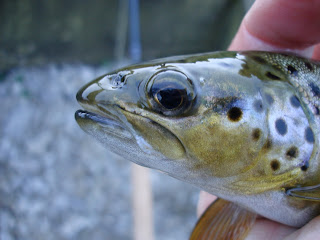 Again only managed an hour after work by which time it was a bit chilly but the river is in superb condition. Went above the works in the fast water. Got a couple of brownies 1 even on a dry adams although I think that may have been lucky as the rising fish were on to something very small. A few fish rising in the sycamore pool, then there always is there. Missed a couple on a biot nymph even getting broken by 1 of them this is really a good fly! On the way back to the car noticed loads of black midge in several spiders webs, maybe thats what they were taking?

First outing of the new season and I managed an hour after work below Baslow Old Bridge. Definitley good to get out again after the spotties. Nothing rising as it was 1730 and a bit chilly by then so tried a biot nymph a la Procter, which managed to get 3 rainbows and an out of sorts grayling. Not a bad start as 2 of the rainbows were like bars of silver and fully finned, a credit to Matthew for looking after the fish during the close season.