This evening I went down to the Willow Pool again to see if I had more luck than last time. There were many spinners of various types about, not too sure what this one is though so any help would be gratefully received, I think it may be an olive upright spinner? 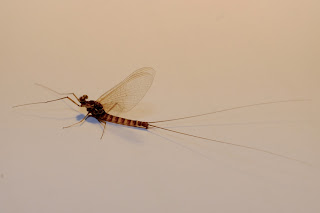 I had on my usual mayfly as there were lots of mayfly spinners about too, the odd one being taken. After a couple of casts a brown took but after a second or two slipped the hook. A few minutes went by and I knew I was covering fish but nothing so a quick change to a grey olive parachute but still nothing took. Fish were rising but I could not see to what even though they were only a rod length out, something small. Nothing was on the surface which they seemed to be taking even though spinners and duns were there which were not really being taken, confusing! The temperature was also dropping and very now and then the fish would stop rising for 5 minutes then start again. A switch to a griffiths gnat only resulted in 1 fish again as I knew I was covering them. I was beginning to get frustrated and moved up to the top of the pool were again spinners were dipping into the fast water. A rusty spinner produced another brown before the temperature dropped considerably and I started shivering so called it a day. All in all a frustrating evening but encouraging to know that the insect life is unbelievable and the crayfish have not had everything.
Posted by Baslowfisher at 12:10:00 3 comments: