I went down to the cattle drink above the works on Friday evening and what a sight greeted me. Lots and lots of flylife about, clouds of sedge and olives fluttering about. This photo doesn't do it justice!

The olives were olive uprights I think. Example below:

At 1930 there were not many rises only the occasional one however within 10 minutes more and more fish were on the move. Whilst the amount of flies around were epic I could not make out what they were rising to as the rise tended to be more of a roll or suck. I had on a size 20 black klink and covered a few risers but couldn't get the drift right. Eventually it came right and a rainbow sucked in the fly and was duly landed on my 7'10" bamboo rod. After losing a couple I noticed a few spinners dead on the water so switches to a size 14 rusty spinner, a bit bigger than when the BWOs are about.

As I moved up the pool I noticed a small sip several times not much more than a rod length away, I cast ahead and let the spinner drift back and a beautiful brown sipped down my fly. After a bit of a tussle this was landed and duly "snapped". A wild brown trout I'm sure as fins were arrow straight and a spade of a tail. I hope Mr PP would be proud? 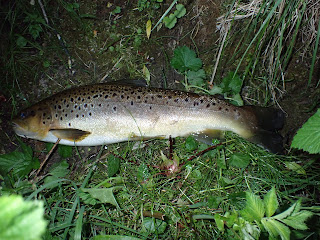 Within another couple of casts another sipper was spotted and another cracking brown landed slightly smaller than the previous. I continued to be a lovely warm evening until about 2045 when the temperature started to drop. The flies continued to flit about but there were noticeably less rises, even in the fast water at the top of the pool.
I became chilled so called it a day in this pool but on my way back I saw a rise by the pulpit and after a few casts landed another rainbow. Only landing 4 for the evening but a start.
This badger was spotted during my last outing, I watched it from the river and I am sure it didn't know I was there!

Latest Update and Start of The Season

Well since my last post I lost my Google account which lets me update my Blog! After much to'ing and fro'ing I may have recovered it!

So what's happened, not a lot! I only managed 1 outing during the winter for grayling, this was into the park and I did get a few grayling on a czech/french leader setup. I was finding it difficult with the Orvis 10'6" Helios, I need some coaching in how to use this method!

Then onto the trout season from 1st April. As most of the UK trout fishers know April was wet and cold followed by much of the same in May!

I ventured out once in late April and decided to start below Baslow old bridge, I had on a parachute Adams and soon landed a small wild brown. This was to prove the only fish feeding for a long while! There were no rises between the bridges and an apparent lack of any fly life. As i said previously the weeks prior had been wet and cold and this must have left any nymphs secure in their hideouts. Below the new bridge I went down to the cattle drink and did spot a couple of risers but that was it, literally. Although the river was up a little it was still chilly so after that I made my way back upstream rather dejected and called it a day.

During May I constantly kept an eye on the river from the old bridge but rises were no existent. Fly life was very dour and I can only recall seeing the odd sedge and willow flies. LDOs were very absent.

It wasn't until last Friday that I ventured out again down to the bottom end. I started around 2'ish. The river was at summer level and clear and the sun was out, temperatures had been low for the time of year so I wasn't expecting much however fish were rising in the fast water to something small or emerges as the only duns around were yellow may duns, again willow flies and the odd sedge. I decided on a small black parachute and as I worked my way up the faster water landed 2 browns and lost 2. I tried various dries and emerges but could not get the fish to take really. I ventured further downstream to Dereks pool and caught a rainbow and lost 2 browns at the head  of the pool on a parachute adams. Getting in at the bottom again I lost a good rainbow and a few casts later landed a nice one around 2lb, these on an olive nymph.

So although the 3-4 hours was frustrating at times at least fish were moving and some semblance of insect activity was happening. Usually by now the mayfly have put in an appearance but not this year yet!

The Bank holiday weekend was lovely and warm and the 1st few days of June too so hopefully things will take a turn for the better.