I decided to try and get out before the trout season closed on the 8th October. I managed a couple of hours above the 1 arch bridge in the park. The afternoon was reasonable with some sunny intervals but not much was happening insect-wise. This in turn meant there was little activity on the surface. I started off with a daddy long-legs as these have been very prevalent this autumn but it didn't muster any interest from the fish. The lack of surface activity meant a switch to a dark olive fox squirrel nymph but this also proved fruitless. Although my season has been pretty barren this year due to non fishing issues resulting in only a handful of visits my friends tell me that the Derwent has been acting rather strange this year with people struggling at times to make a catch. I wonder if the crayfish problem is causing a shortage of insects? Anyway I worked my way up towards the bottom weir without any offers then in the fast water I notice a small rise in some slack water on the far side. I switched to a LDO and covered the rise area a few times but because the fast water was dragging away the line I could only manage a few seconds of drag free drift needless to say eventually a fish came up and I took a nice brown. 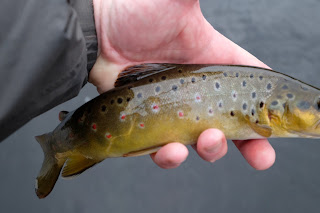 I continued up the fast water also covering the slack water and another brown  came to hand from the far side to the LDO. 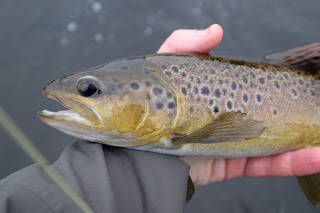 The sun was now dipping below the hills and the temperature was really dropping so I called it a day and an end to my trout season for 2016. Fortunately on the Chatsworth section of the Derwent we can fish for Grayling until the end of February so I will be making use of this especially as I am retiring at the end of the month!