Went to the CLA gamefair at Belvoir (beever) Castle with Roger and Derek, this is the 1st time I have been. Made for the fishermans row 1st to checkout the various stalls. All the usual people were there WTT, S&TA, Lakeland Flytying etc. It was overcast which was ideal for browsing as the tents were not hot. Bought some rusty spinner cdc for those evenings spinners and some golden plover hackles to tie some spiders. Caught up with some old faces too. It was surprising how few people were there. Several times we were the only punters in the various stalls, must be very worrying for the stall-holders. A couple of times gusts of wind sent the displays of expensive Hardy, Sage and Orvis rods clattering across the ground but unfortunatley the proprietors were not up to accepting offers for shop soiled goods! 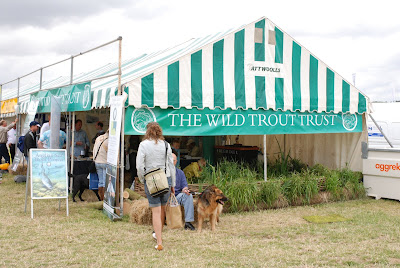 The WTT had a couple of good displays, one was a piece of round gutter inclined at a gentle angle to represent a stream with riffles and runs, with gravel in the bottom and various pieces of twig fastened to represent woody debris. As a piece of the twig was removed it was really surprising how quickly the gravel was washed away thus depleting the spawning gravel. Likewise when woody debris was placed in the run and gravel introduced at the top, how quickly it built up behind the obstruction. Stuart Crofts was also displaying various nymphs (BWO and stonefly) and shrimps, again very informative as usual, Stuart is always very enthusiastic and eager to share his knowledge.

We left around 1630 but could not get over how quiet the fair had been. There were not traffic hold-ups and the carparks were only half full at the most. The economic downturn has obviously affected everyone. Overall a good visit and recommended if you have not been before and interested in all things country.

Went down to the willow pool for last orders at 2030. Not one of the warmest evenings! Was not expecting much but this pool is sheltered and there were a lot of spinners about and small pale sedge, or thats what they looked like. Started off with an olive dun as my rod was still made up from Monday night and immediatley started catching, the first 2 a decent brown and a nice rainbow both as wild as they come. Then connected with something larger which made off with my fly and cast. Hopefully it will be able to get rid of it fairly quickly. Made up a new cast and put on the old faithful rusty spinner as there were a lot on the surface now. Again started to connect with fish and landed several more browns, most of them stock fish. The rise to the spinner was totally different to that of the dun, the fish were either head and tailing to take it or just sipping it down, superb! Fished until could not make out my fly on the surface but struck when I knew it was in the vicinity of the rise, 50/50 hookups. Temperature dropped by 2130 so decided to tickle them with a sedge, only 1 taker but the best fish of the evening running to nearly 2lbs fin perfect and again a wild one, my opinion anyway. Finished up with 8 browns and 1 rainbow, not bad for an hour and 15 mins. 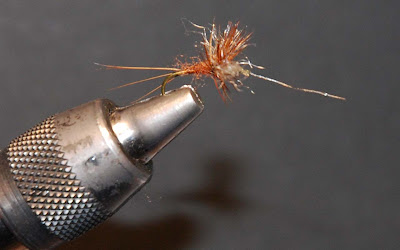 My interpretation of a rusty spinner, this is the one which took the majority of fish. 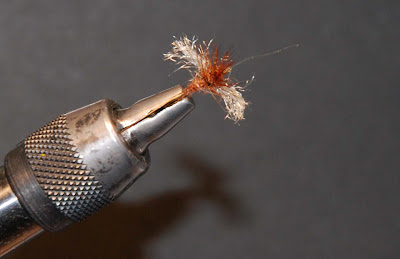 Another Good Evening (then all evenings fishing are good)

Decided to go over the road for the last hour, below Baslow old bridge. Temperature not as high as expected, river in good order considering all the recent rain. Rusty spinners on the surface again and also duns hatching. Caenis and the occasional sedge,the swifts were also about taking fly. Things were looking good. Started with a CDC sedge and took a few rainbows including a superb 9" wildy. Changed to rusty spinner and continued to take another couple including a nice brown and a grayling. Finished at 2145 picking up another couple (totalling 8 all to rising fish) including another wild rainbow, encouraging! Temperature dropped even further by the time I finished. Roll on tomorrow evening!
Posted by Baslowfisher at 22:08:00 No comments:

Actually managed to get out last night! Met Derek by the 1 arch bridge at Calton Lees, went upstream to below the bottom weir. The small deer (fallow?) had put in an appearance as we walked up. 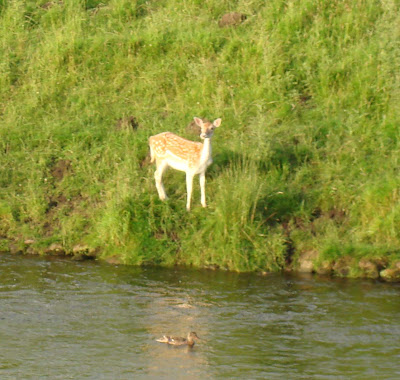 Unfortunately only managed 2 shots (not with a gun) as I was using Mrs P's camera and the battery died so no fishy pictures. 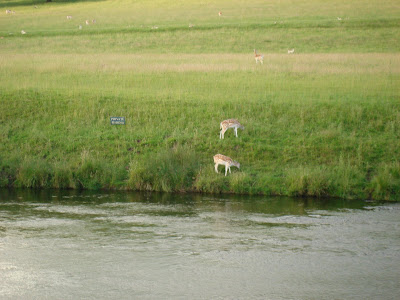 Derek fished 1 side with a dry pheasant tail and I fished the other with a klinkhammer, we both connected to fish straight off but neither of us could keep them on initially. Fish were taking the bwo duns/spinners and some small sedge. It wasn't long before we were both connecting to fish, I took predominantly browns with just 1 small wild rainbow and a grayling. I moved up to directly below the weir where there are a few deep pools so just dropped a "larry's pride" (nice one Mick!) which was taken by several good browns. Decided to move further down below Derek where the trout were going berserk for the rusty spinners. I took 2 good browns 3" from the bank again on good old larry's pride, by now it was about 2130 so switched to a rusty spinner and picked up more browns. The rise forms varied from full blown splashes to barely noticeable sips which tended to be the bigger fish. There were so many fish taking the spinners as the surface was covered by lots of spinners that I was spoilt for choice as to which fish to cast to. It has been a long time since I have seen a spinner fall like this, certainly do not remember anything like it last year. Finished around 2230 after a really enjoyable evening as it did not look too promosing at 1900, the temperature dropping from 2200 but still fish rising! Lost count after 15 of the number of fish taken, Derek also finishing with a similar number. On the way back to the car heard the stags calling thier harem together by now some of the larger deer had also appeared. A truly wonderfull picture in the setting of Chatsworth Park topping the evening.
Posted by Baslowfisher at 17:45:00 1 comment:

Got back last night from 2 weeks in Corfu (cor phew far too hot), itching to get back on the river! Got up to date reading all my copies of the usual fishing mags, several times also read John Baileys latest Trout at 10000 Feet which is a decent read. Hoping to get out tomorrow evening providing the current rain does not bring the river up as checked the river before and it looks in good order. Derek informs me that there have been some good evenings with the rusty spinner these last couple of weeks. Still the odd mayfly hatching, this seems to happen each year when odd mayflies hatch all through the season, I have even seen them in late september! Is this a record? Rain coming down heavy now (2200) however fingers crossed for tomorrow.
Posted by Baslowfisher at 21:46:00 No comments: