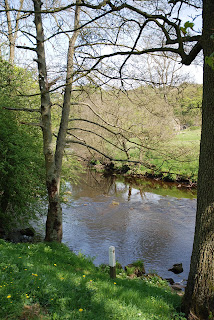 My good friend Roger invited me onto his stretch of the Derwent above Grindleford. We started after a quick lunch and a beer on beat 8. There were a few fish rising in this pool just by the hut so I started there and quckly took a small wild brownie on a LDO. Covering a few more fish raised nothing. I had previously noticed a few greenfly about and so switched to a Stuart Croft greenfly, a pattern he tied at one of the Grayling Society meets during the winter. It looks like a double badger with Chartruese body and pale dun hackle. Needless to say I covered another rise and then took a small rainbow. Roger then joined in the action on the pool and started dropping them off. You get days like this were nothing stays attached and Roger was begging to have one of them!
The pool was slower moving﻿ than normal due to the exceptionally low water conditions, I recon that the Derwent must be 8-9 inches below normal summer level. The bottom is all scummy in places, it is desperate for a good flood to flush out the rubbish and freshen everything up. 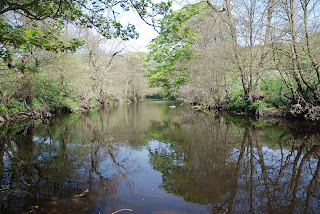 I moved up to the next pool where again there were a few fish head and tailing to the greenfly I think.﻿ So I proceeded to fluff a couple of casts including getting them in suitably positioned trees which then put the fish down. I could still make out the odd flash of a fish taking nymphs, I knew reading Oliver Kites book Nymph Fishing in Practice would gel. Anyway I changed to a dark olive fsn with an olive bead to get it down and on the second trot the leader stopped dead and I struck into a magnificent wild brownie that took off! When I eventually netted it it must have gone close to 2lb. This picture was taken one handed whilst balancing my rod and the fish in the net so apologies for it having a bit of camera shake. 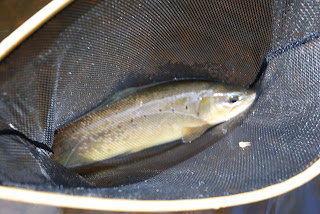 ﻿
We continued up to the top of beat 10 and I managed a decent out of season grayling and another brown. We finished at 4.30 after a really good afternoon. These beats are excellent and with a bit more water you can see they would be even better, thank you Roger for a lovely afternoon. 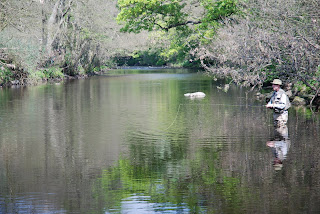 After a nice walk this morning along Bradford Dale and down into Lathkill Dale with a "sarnie" on the bridge below Raper Lodge, I then paid a visit to Bakewell for Mrs P to have her weekly fix. We couldn't resist a quick clotted cream scone and jam in the Lavender tea rooms below Peters fly shop. I of course had to pop in to speak to Peter and look at the wading boots he had as I need to replace my Simms boots as I replaced my Simms waders (B. rubbish!) last season. Going to try the Vision Mako, just waiting for them to come in.
Anyway got down to the hut at Beeley by 0230 pm the sun was in and out as a few clouds drifted about but a definite nip in the air as the northerly downstream wind gusted. I decided that I WASN'T going to put on a FSN so went for my D Rib dark olive nymph. I started in the pool above the hut and there was the odd rise here and there but nothing you could rely on. I quickly took a decent rainbow of about 2lbs followed by an out of season grayling. As I worked my way up the pool I was upstream nymphing and the leader again stopped dead in its tracks and another rainbow was landed again to the same nymph. Upstream nymphing is nearly as good as fishing the dry, but not quite! After finishing this pool went down to the pool above Max's bench, I think I will call this Derek's pool from now on as he is the only other person I have seen fish it. I took another grayling and lost a couple of trout. John the reserve keeper came down and we had a good chat as I haven't seen him since well before Christmas. I came out and fished the head of the pool as its too deep to wade up all the way, again I lost a couple more and landed another rainbow before calling it a day at 5pm as there was not really anything rising constantly, still early in the season. I didn't spot many flies about today only the odd sedge here and there. All-in-all an enjoyable afternoon though.
Posted by Baslowfisher at 20:30:00 2 comments:

1st Trip to the Derwent 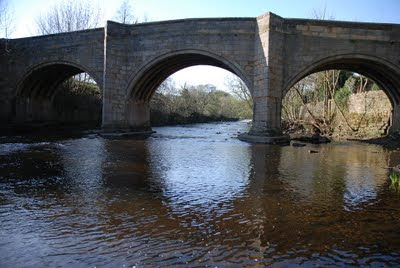 On Friday after work I decided to have half an hour over the road to test my new 8 weight, not the right tool for fine nymphing and dry fly but just wanted to see how it cast. There was nothing rising so put on my good old fox squirrel nymph and on about the third or fourth cast had a take but the trout gave one massive jump and was gone. A fish rose in the run in to the pool below Baslow old bridge so I hastily put on a dry, again my trusty grey-olive parachute and covered the rise and blow me up came the fish and strike it was on but only for a few seconds as I am sure my rod was too stiff to cushion the take. Hey ho! It was a glorious afternoon/evening and I sat on the bench by the churh just to take in the fact that the long cold winter was finally behind us and spring had sprung! Mathew the keeper came down and we had a good natter for an hour. He told me that he had put some bigger fish in from the tanks in the childrens farmyard at the house as they had got too big. Fish up to 7lbs now they will bend your stick.
Sunday dawned very sunny and warm again so rang Derek to see if he was up for it but he declined due to sore hand from landing all the monsters which Matthew had told me about. He has already had nearly 100 fish so far this season on the Derwent, I am sure if you held out a cup of water he could catch a fish from it. He is really a good angler, one I hope to emulate.

I went down to the willow pool and tackled up a bit lighter with my 9' 5 weight and good old dark olive fox squirrel nymph, I eased into the pool at the tail which has really changed following the floods of the winter, each new season means you have to evaluate the pools again to check the levels as some have shallowed up whilst others have been scoured out. No fish were rising but I had a couple of follows and then bang! I hooked into something. This stayed on and led me a merry dance before I could get i 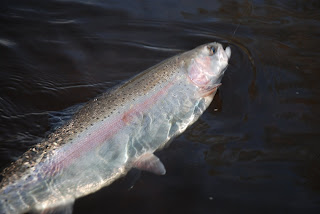 t's head up. Then I saw the biggest rainbow I have seen in this river, it must have been between 6 and 8 pounds of pure fisghtinmg machine. After it leading me around the pool I eventually managed to get its head up and readied my net but "flippin' heck!" it wouldn't go in. I had to man handle it and released a cracking 1st fish of the season full finned and in excellent condition, obviously 1 of those monster Matthew had told me about. I continued up the pool and by now there were a few sedge knocking about, probably grannom. A few fish were showing and I had changed to a grannom emerger (ala Louis Noble) and covered a fish close in an up he came and again it was on. A nice wild brown of about a pound and a half well mended from the winter. I came out and fished the head of the pool as its not possible to fish up the whole pool as there is a deep bit right across the middle which stops you so you have to exit at the cattle drink. I fished the top of the pool and took a grayling to the dry sedge, now the temperature was dropping and it was only around 3.30pm so decide to call it a day. Not a bad start to my Derwent season.
Posted by Baslowfisher at 21:37:00 No comments: