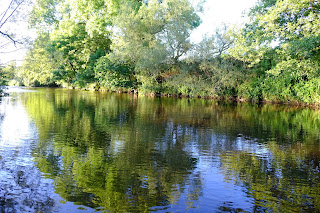 After a busy few weeks I managed a few hours this evening, a long awaited return to the Derwent! It's the posts from other people's blogs and Facebook the has kept me going but led me to a bit of carbon fever. Anyway I went down to the Willow Pool  and remarkably there were no cars in the carpark. It was a glorious evening after a lovely sunny day although the wind had now dropped by 1930. Not knowing what would be hatching I put on a general olive pattern I had tied up with calf tail wings and a full hackle. I got in at the tail of the pool and waited to see if anything was about but nothing stirred. After only a couple of casts I noticed my leader was badly twisted so off came the olive. There was lots of sedge buzzing about so on went a grey sedge. The odd fish was showing here and there but nothing constant. I covered a few rises but nothing, I cast across and as the fly swept under the branches on a tree opposite a slight drag of the fly caused a slow head and tail take. A rather annoyed rainbow then tore off around the pool jumping numerous times. Eventually it was drawn over the waiting net and went about 2lbs, the sedge stuck in its scissors. I covered a few more rises as I made my way up the pool and then a brown of around a 1lb took and was also landed to the grey sedge. This was followed by a lovely rainbow of about 10" which was covered in spots and had the tell tale white edges to it's fins, surely a wild one in anyone's eyes and a rare thing ob beauty. I was getting my camera ready to take a shot whilst holding it in my net when it decided freedom was better than a hollywood career and jumped out and was off.
Fish started o show more consistently now and covering them with the sedge produced nothing, which was odd considering the previous 3 fish. I then noticed a spinner lying crucifix on the surface so off come the sedge and on went one of my rusty spinners. As I was looking around I notice that under the trees on my bank there was cloud of spinners, I should have seen them earlier! I covered a couple of fish and they took but either I struck too soon or they missed the fly. Eventually as I worked my way up to the faster water I noticed more consistent rises and after covering several and having some takes I landed another couple of browns however one was long and thin which did not look too good for it as it should have been in tip-top condition now after the excellent mayfly hatches in previous weeks.
I called it a day at 2115 as the sun had dipped behind the hills and the temperature dropped and with it most of the fish too.
As I left the car park a full moon was showing over Chatsworth. 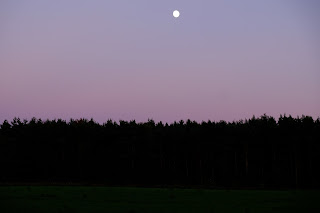