Well how could I eclipse my previous catch! I do have a couple of videos but cannot attach them for some reason.

I decided to have a punt down the bottom end so arrived around 1:30, the river was looking good although a bit low but gin clear for the Derwent which always carries a tinge of peat stain. Now is mayfly time but not reaching the peak yet so I was undecided if the fish would be fully onto them. I tackled up and the only other person was departing so I had the whole length from the hut to the bottom limit to myself! I went down to Max's bench pool as this is one of my favourite pools on the river. I had on my version of a mayfly nymph based on Phil Whites mayfly nymph. On my down to the pool I noticed a few fish rising in the upper pools so things looked promising. I sat on the bench to see if there was any movement and immediately noticed a few head and tail rises and the occasional splashy rise to a newly hatched mayfly although there were not that many about. Once I got in the river there were a lot of yellow sallies around with fish taking them. I trapped one for later id. here it is. 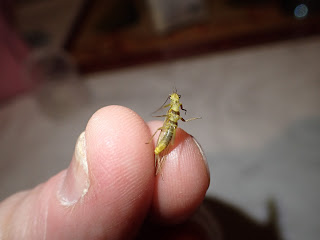 The photo of it's top was too blurred as it kept crawling!
Anyway after literally 2 casts I was into a fish, a lovely rainbow around 3lb and then the next another which was it's twin! Things were looking good. I continued up the pool taking several rainbows and eventually a lovely brown around between 1 and 2lb. I was also getting that soggy foot feeling as my waders were beginning to leak again. There were several different flies hatching including some olives and not all successfully hatched! 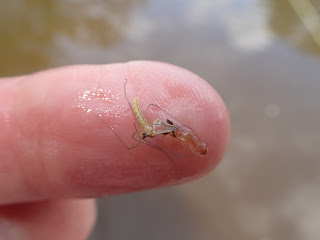 Even what looked like some mayfly which had "transposed" into spinners which I think usually happens in the  trees were on the water. 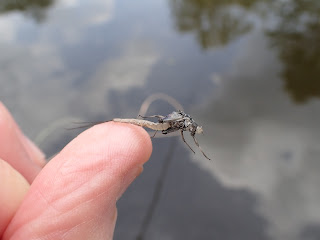 I fished into the next pool too but it was not as "active" as the previous. The odd fish was moving to freshly hatched mayfly so I quickly switched to a dry mayfly and managed to land some and lose some too. Wetness was beginning to creep up my leg and so I called it a day, I finished with a lovely wildy to take my tally to 8 rainbows and 4 browns. 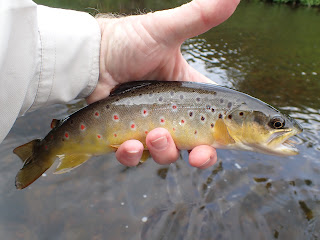