I checked the water level at the old bridge in Baslow at about 11 and it definitely looked fishable so arranged with Derek to meet him at the works around 2. I decided to give my 7'10'" Derwent bamboo rod an outing too. I decided on a mayfly dun at first just to see if there was any action but after a while at the sycamore decided that I was flogging a dead horse. Not a single fish rose and also the river seemed to have got decidedly more coloured. A dark olive fsn was tied on and even that didn't do the business. If I didn't know better I would think the river was devoid of fish! The river continued to cloud up and even with a slight hatch of mayfly and some yellow sallies that didn't bring much up. Even Derek was not fussed and failed to connect above the cattle drink. I worked my way up and then decided to switch to a mayfly nymph and by sheer floor took a brown. At 4 I decided to call it a day and picked Derek up on my way back to the car. It just goes to show how quick the river can colour up in a few hours, we have been caught out like this before but that has usually been below Bar Brook. Hey ho at least we wetted a line! The river will probably be out of sorts now till at least Friday.
Posted by Baslowfisher at 20:04:00 No comments:


Today I took a guest, Dave,  and so went down to Beeley again as this part of the river is beautiful, that's not saying the rest isn't!
We started in the pool above the hut using mayfly nymphs, Dave up the left side me crossing to the far bank. I soon contacted a fish which fought well initially but to my surprise it turnout to be a superb PERCH around 15" long. The nymph was well back in its mouth so it definitely wanted it. I have caught perch before in a few other pools but never thought there would be any here. Within a few more casts I landed a superb rainbow around 2 1/2lbs. Dave had switched to a dry as a few mayfly were coming off plus a few spinners were about too. He missed a good take to the dry, too eager! We only fished for about an hour here before adjourning for lunch giving the mayfly time to get active.

After lunch I thought that we would have a repeat of last Monday and fish the same pool. I gave Dave a few mayfly nymphs and duns to try. I led the way and Dave fished the fast water at the tail whilst I made my way upstream. I noticed him landing a few fish, great! I am always anxious that my guests land fish but now Dave was well into it. I persisted with the nymph and a brown was landed but the mayfly by now had started to hatch quite a lot so on went the "usual".  I proceeded up the pool to the cattle drink landing several browns losing even more! Again I reached the stepping stones and noticed a fish rising in the same place a last Monday. Again I covered it a couple of times before getting a drag free drift and up it came, a lovely brown which again had me all over the pool. 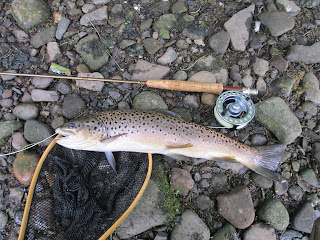 Notice anything about the above fish and the one from Monday? I think they are the  same fish going by the markings around the gill covers. I was about 4pm by now and the amount of mayfly duns and spinners plus sedge, and sherry type spinners was a treat to see. Needless to say at 4.15pm the heavens opened and for about 30 mins torrential rain ensued. Maybe the flies knew what was coming. We sheltered under a tree and watched the mayfly still hatching and the odd fish taking them even though the surface was pocked by all the rain. A few casts after the rain and another brown was taken but the temperature had dropped and you could see your breath, this resulted in a lack of fly and the fish went down too. I ended the day with 2 rainbows 6 browns and 1 perch. Dave had a better afternoon landing a dozen fish.
Posted by Baslowfisher at 16:56:00 No comments:

I decided to go down to Beeley today, on arriving Bill was also there together with a host of others. Derek arrived and decided it was too congested so went into the park. Bill and I went down to Max's bench pool. I went upstream and Bill down. No mayfly were hatching at this time around 1330 so on went a mayfly nymph and I soon landed a nice rainbow. As I waded up the pool mayfly started to hatch out however the fish seemed a bit reluctant to take any with only the odd one being splashed at. As I progressed the hatch became heavier and a few more fish were showing so on went the good old 1-up-1-down mayfly (Phil Whites pattern!) and I started to connect with fish. Several browns were  landed successfully! I managed to get right up the pool to the cattle drink this year as the winter floods had changed the river bed slightly. I decided only to cast to rising fish instead of fishing blind so although fish were rising they were not consistent in 1 place however a couple of fish covered rose again and I landed a few more browns. I got to the stepping stones and  a fish rose a couple of times in the same position, I watched it for a while then placed my fly on the direct line to it and up it came. A magnificent brown to finish the day which had me all over the pool. Below is said brown....... 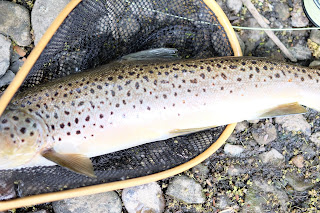 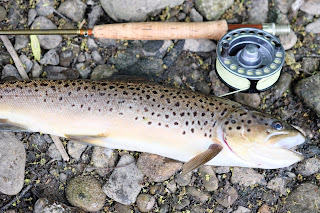 I finished the afternoon with 6 browns and 2 rainbows.
Posted by Baslowfisher at 16:28:00 No comments:

I only went out fishing the once at the beginning of the month as I have been backwards and forwards to see my Mum in hospital.
I went into the park and fished for a couple of hours below the cricket pitch. A few fish were rising to the multitude of greenfly and black smuts which covered the surface. I only managed to land a few on a size 24 greenfly losing more! I always have problems getting the fish to stay on with the really small flies.
The mayfly started during last week and Derek tells me the hatch is even better than last year when it was a real bumper year. Planning to get out tomorrow with him............
Posted by Baslowfisher at 20:44:00 No comments: