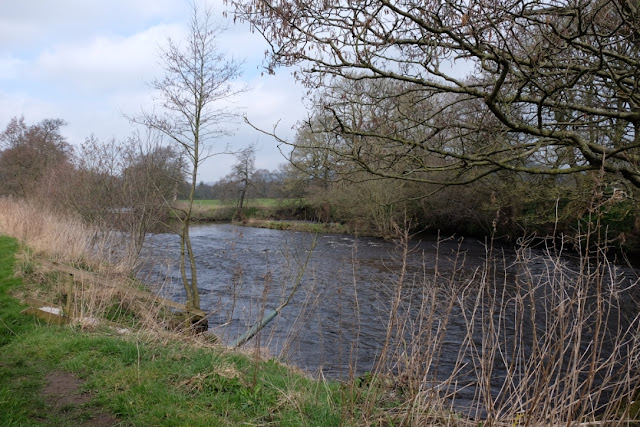 I commenced my 2016 trout season today and a decent start it was too. Although it had rained yesterday and the Derwent was up about 3 or 4 inches the only colour was a tinge of cold tea. It had started off cloudy here in Derbyshire but by 12 the sun had burnt the cloud off and it was quite pleasant. I decided on the Willow Pool and when I got to the car park I was the only one there which was surprising. I tackled up my 5 weight with a LDO nymph as the wind was a bit on the chilly side even though the sun was out. When I waded into the tail of the pool I was surprised at the strength of the current as the tail was now deeper as a result of all the winters floods and the water temperature was definitely on the cold side which did not help any insect life!

I gingerly made my way upstream but nothing stirred. A few flies were buzzing about but nothing which you would call a hatch. I got to the limit where you could wade safely without shipping water and retraced my steps not spotting any rises. On  the bank was a dead grayling which something had had a go at, strangely only the head was missing, maybe it was the roe the beasty was after.

The head of the pool produced a similar result a big fat zero, only a tentative pluck from something! By now I was getting rather cold so before calling it a day I got in again at the tail and fished the slacker water down the near bank and soon had my first trout of the season, a brown which had obviously overwintered and was in need of a good meal and had taken the dark olive fsn.


So at least I knew fish were about now and I started to fish with a bit more enthusiasm. An overwintered rainbow soon followed to the same nymph, now I was on a roll!

A final brown was also landed taking my tally to 3 which wasn't bad for the first outing. I called it a day by 2.30, a good start.