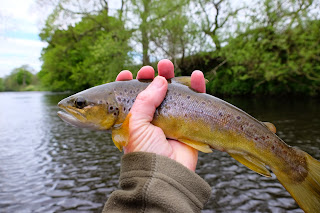 I decided to go down to the willow pool around 3.30, the day had dawned wet but now it was dry but still a downstream wind greeted me. I started with a small FSN in dark olive but nothing was happening with it. The odd fish showed as there were some olives hatching and also some black gnats. I put on a size16 black klink and after a few casts right under the trees on the far side a fish took but in my haste I obviously struck too soon. This is my party trick at the beginning of the season! Another fish rose and  so I covered this and this time I delayed the strike a touch and it stayed on and a lovely brown was landed. The wind was persistent and really rather chilly for May so much so that I had to come out of the river and put my waterproof on to try and break the wind. An olive came past which I trapped and it looked like a LDO so on went a grey olive parachute to match hopefully. There was the odd fish here and there but nothing taking my fly then a fish rose at rod tip length so I dropped my fly on it and up it came and another brown was landed. I was starting to shiver so decided to see if there was anything further upstream by the sycamore pool as the walk would warm me up. 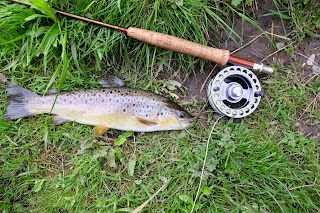 At the sycamore pool there was no movement so I went back to a FSN but I wasn't enjoying just casting and retrieving slowly. Eventually another brown took hold and was landed but now I was too cold so decided to call it a day after a couple of hours 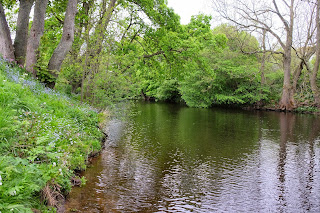 The Sycamore Pool looking upstream.
Posted by Baslowfisher at 19:17:00