A Hard Afternoon and a Dunking!

Our fishing hut is finished now and a right ol' place it is! All mod cons and looks the part, many thanks especially to Matthew who did the lion's share of work on it and the rest of the team too, a great job!


I had arranged to meet Bill and Derek down at the hut for lunch today so that we could fish the mayfly. After a natter we started fishing in Max's bench pool, mayfly, yellow sally, yellow may dun and lots of other assorted fly were coming off in droves. The odd fish was rising which I suppose was to be expected as the sun was shining too. I started off with a mayfly nymph and had a few tugs as I worked my way upstream, maybe the fish are still wary of the mayfly as this usually happens and only the odd fish take them until the word gets around. A fish rose to a mayfly under the trees where I had started so I retraced my steps and put on my go-to mayfly, Phillip Whites's 1-up-1-down. I covered the fish and 1st pass it had it and a strike and a nice brown was landed. A 2nd fish had also risen as I had made my way down and I covered this and on the 2nd pass it too had it but it either missed the fly or I struck too soon! I continued up the pool and a couple more fish had a slash at the fly and appeared to take it but on striking there was nothing there. Maybe these fish are still a bit unsure as usually the take is very definite. The rises stopped even though the mayfly were still coming off so I switched back to a mayfly nymph and took another brown. As I was planning to fish this evening I only ended up fishing for an hour or so and returned to my car through the thick clouds of mayfly spinners. 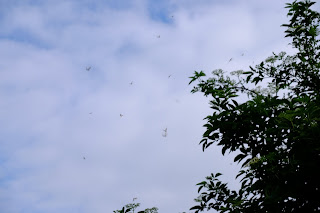 In the evening I went down to the willow pool (again) and sure enough fish were rising but I could not tell to what, certainly not mayfly. This time I started at the top of the pool and worked my way down covering fish and getting nothing just enjoying myself  minding my own business when someone decided to get in at the tail of the pool and fish up! I could not believe it, talk about fishing etiquette, it was not as if they did not see me. Consequently once I reached a point of where I could have probably cast and hit him I decided that enough was enough and attempted to get out whereupon  I stumbled and fell in, SH!T or something similar! Needless to say that put the lid on my evenings fishing, thanks whoever you are.  I know I don't own the river but when someone is fishing a pool you don't just get in with them unless invited or am I being too touchy? Rant over now.
Posted by Baslowfisher at 22:02:00