An Afternoon down towards Beeley 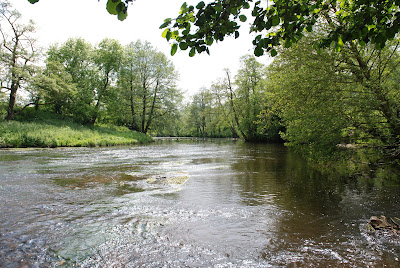 Decided to take a half day and go fishing. Arranged to meet Derek at 1330 at the fishing hut. Got there on time and checked the river out, in perfect condition, lots of ranunculus but not in flower yet, level a bit on the low side but gin clear. Mayfly starting to hatch. Met another member, Bob who had a few guests with him and there were a couple of other cars so probably all the best pools taken.

Tackled up whilst waiting for Derek then Bill came back to the hut with a guest, Caroline, Bill's niece (or thats what he told us!..........only joking Bill) certainly much better looking than his usual guests he brings! 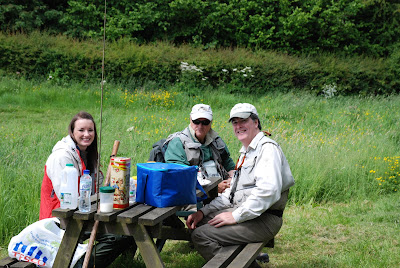 Derek arrived 1400 ish and we spent the best part of an hour chatting to Bill and Caroline with the usual p!ss take.
Decided to fish the bottom end with Derek and work our way back up to the pool below Max's bench. Started to catch on a mayfly nymph as not that many fish rising at the moment. Caught 1 brown, 1 rainbow and 1 grayling.

Derek leapfroged above me and went up first, not the best thing to do as Derek is a fine fisherman and not too many fish get missed by him. He was using the 1-up-1-down mayfly and was constantly knocking fish out. The mayfly were now hatching together with the odd yellow may dun, never seen a fish take one of those although I know some people swear by them. Some olive uprights about as well with small black 'things' near the surface. Decided to change to the same and got one. Temperature dropped and Derek said it was down to 60 however within half an hour it had dropped to 55 and storm clouds were massing. Before long it started to rain but only a light however it affected the fish as little or nothing was now rising. The odd fish started to show after the shower but it wasn't long before the rain started to come down quite heavy so called it a day at 1730 as I was now frozen! Not a bad afternoon certainly better than working, ended with 4 fish and more pricked and lost, Derek ended with 10. 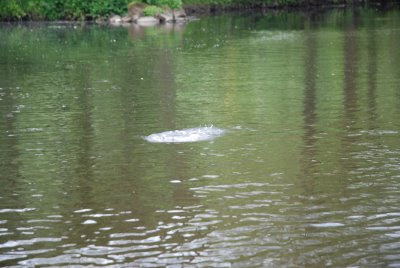 The take, just missed it (photographically)

The Rainbow, a wild one? 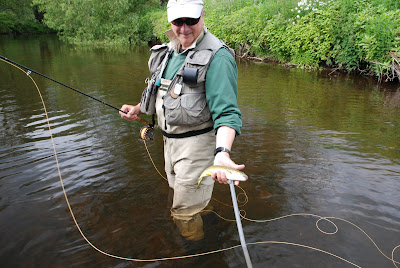 Followed by a brown

Weather forecast not too good for the weekend, hope the river is ok for Sunday as Mick, aka Trugg, is coming down as my guest, as long as the river doesn't come up but the temperature does then it should be a good day.

The charolais bull is in the field adjacent to the lower stretch, he looks very scary and built like the proverbial brick outhouse but he has his harem to keep him from chasing us, hopefully?
Posted by Baslowfisher at 20:10:00