An Afternoon Towards Litton 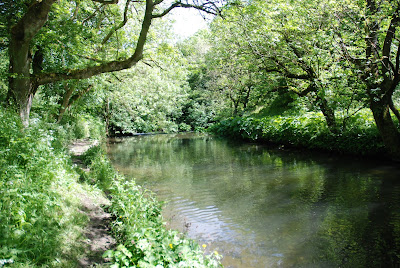 Derek said lets go to the Wye so not being one to refuse an invite onto Cressbrook and Litton said oh well ok then! Started on the Presidents pool and worked my way up through a couple of pools. Mayfly and fish rising all the way, tried my new hatching mayfly pattern and couldn't go wrong, maybe thats why they call it duffer's fortnight! Caught plenty of browns plus a few wild rainbows. Met up with Derek back at Presidents where Derek proceeded to bully a 3lb+ rainbow which was minding its own business. 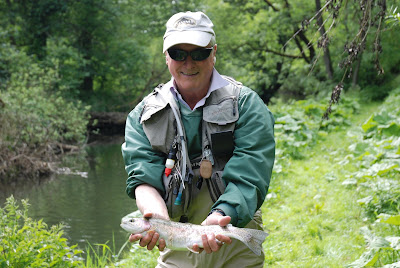 Decided to walk down to the rock face and fished there taking several browns again. Noticed a small rise on the far bank so worked my way round to cover it and wallop! The smallest rise produced the best fish of the day, a cracking brown which had me all over the pool. 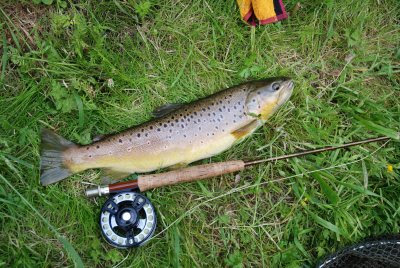 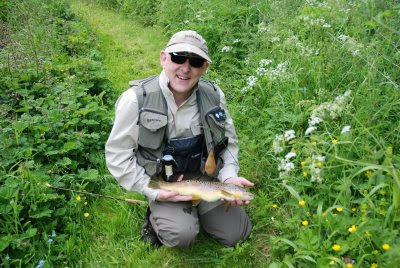 That Brown!
The Wye is a good river to test out new patterns due to it being so much clearer that the Derwent which has that peaty tinge to it, you can see the fish's reaction to your flies and whether they inspect them or dismiss them completely out of hand. Although its only a stones through from the Derwent they could not be two more different rivers to fish both having their own attractions.
Decided to call it a day at 1830 so went back to mine for a BBQ and polished off most of a bottle of merlot, days don't get much better that this!