I decided to have a couple of hours in the park as it had been a glorious day but the heat had gone out of the evening. I went down to the cricket pitch and wandered down to the stump, another of my favourite places. There was the odd fish showing here and there and on my second or third cast with my good old rusty spinner it was taken by a lovely wild brown. 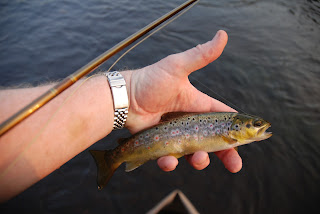 This was followed by a decent out of season grayling and another small brownie. A few spinners were about, possibly LDO spinners. I then wandered down to Mary's Bower where there were numerous fish showing. I covered a few and touched them with the same fly and then managed another couple of brownies and the twin of the previous grayling. I wasn't convinced that this is what the majority of fish were taking although there were spinners about it was not immediately obvious to what. I suspected it was something small however just as I was perusing through my flybox a couple of mayfly duns floated past I also spotted a couple of shucks so hey they are on the move! Anyway I digress, so I put on my "Nana's" fly tied klink style on a size 18 206BL, love it, I have blogged about this fly before. A small rise showed in the run in to the pool and after several passes up he came and took, wow! don't you love it when a plan comes together. It had me all over the place and eventually on the second attempt I man handled a cracking 6lb rainbow half into my net half out and ran up the bank to safety. After that anything else would be an anti climax so I packed up and went home early! 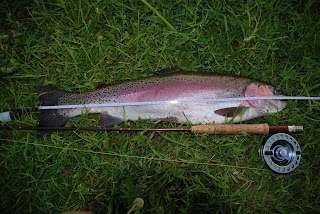 In the senties I used to love finishing the day on the water from Queen Mary's Bower up to the cricket pitch. On the nicest evenings the water would be pink reflecting the sky and it was not unknown to share the flat water halfway up with a heron! Your post has transported me back in reverie...

What a whopper! conragts on kick starting your duffers, I'll have to try your nana's.

RR, Yes it's a lovely fishing scene there with Quenn Mary's Bower to your right and the restored Chatsworth House in the background. I too have shared the river with different forms of wildlife there, once a magnificent stag stared me out as his ladies stood by behind him for protection, certainly intimidating.
Cheers,
Colin

Mick, Did I send you any of "the fur"? if not drop me an email with your address and I wi;ll send you a patch.
Cheers,
Colin

I read your and other Derbyshire blogs with a tinge of envy. What a pair of fish, and a 6lb er on such a small hook. Wild Trout Chalkstreams down here are beautiful, but they don't seem to fish like your Derbyshire rivers do, especially this year.
Roger Fagan
http://wildbrowntrout.wordpress.com

wow so big nc join our blog for movies http://cosmofilm.blogspot.gr/