Friday - 1st June
My weekend started with a couple of hours in the evening down at the willow pool. The temperature wasn't great but there were loads of large spinners around all about a size 12 with grey bodies and 2 tails, ldo or olive uprights? I had on my greyolive parachute in a 14 and took a small brown. Rises were only here and there so if you covered one it wasn't definite that the fish would come up again. After a while I changed to a rusty spinner in a 14 and took another couple of browns before calling it a day.
Saturday 2nd June
My son Adam wanted a day so we decided to get onto the river quite early for me 11.00, again we went down to the willow pool. It was at this point I realised I had left my camera at home, brilliant! Adam started at the tail of the pool and soon landed a couple of rainbows, a great start as I always want him to catch fish as he rarely gets to go fishing, golf is his favourite pastime. I decided to have a chuck too whilst waiting forever for the kettle to boil and I also took a couple of browns. Only the odd mayfly was coming off at the moment but the sun was shining and we were fishing so everything was good. After a couple more fish we decided to go down to the gully pool. This pool is good when the sun is out as its sheltered by lots of trees, fish were showing here and there and by now the mayfly were coming of more frequently and the fish were taking them. We both changed to dry mayfly, the good old 1-up 1-down (Philip White's pattern). This is the pattern I use almost exclusively now when the mayfly are about, I have dabbled with other patterns but none seem to equal this for me. We both took fish as we proceeded down the pool, me first as Adam didn't have a wading staff and the bed of the river had changed since last year, still bottom clenching! I skirted around the deer boom and then got down to Bar Brook were the mayfly were only coming off here and there. It was odd that the mayfly came off in fits and starts, a good flow then nothing for 20 minutes then again for 20 minutes and so on. I reached here during one of the off spells and so went back to my mayfly nymph. First cast and a cracking rainbow of between 4 and 5 pounds resulted, not quite as big as the 6lb'er I got earlier in the week. This was followed a couple of casts later by a couple of blues in the same weight range. These took a good 10 minutes each to get in, they fought like demons and jumped like sea-trout. I spoke to Matthew about these and they had been stocked in March and were from the previous season as they had been kept in tanks over winter. By now Adam had joined me and we both continued to take fish mainly to the dry. The only problem with fishing these big mayflies is that they play havoc with your cast. I had on 3lb tippet and had to change it numerous time due to the twisting effect of the fly. It was a great afternoon fishing the mayfly however I don't think the fish were totally switched on to them as many of the newly hatched duns made it to the safety of the bushes. We finished by 1800 as the hatch finished around 1730 and we had taken over 30 fish between us. A great day.
Sunday 3rd June
Rain rain rain, a horrible day, no fishing just sat and read the paper and tied up some more mayfly nymphs. At least the rain didn't bring the river up.
Monday 4th June
I arranged to meet Derek at Bar Brook around 1400 but I was a bit late. I wandered down there but he wasn't around so I started to fish. The mayfly were hatching in droves now as the sun was out but not particularly warm. Bar Brook was spewing out brown coloured water which left a distinctive line where the 2 waters met as the Derwent only had it's usual tea coloured tinge. The hatch was more or less constant today and I took several browns all to the dry mayfly, same old pattern as before. Fish were rising in both the clear water and the colured water from Bar Brook, It's interesting to note that the coloured water wasn't putting the fish off. As Richard Walker once said "if you think the water is dirty put some in a glass and you will see how clear it is" or words to that effect. I fished till about 1630 when the hatch petered out but the same spinners as Friday were still about plus some smaller ones which I suspect were BWOs, but maybe wrong. I switched to the greyolive para again and took my last fish of the day another brown. That was 6 browns for the couple of hours which in my book ain't bad. As I made my way back I spotted Derek in the gully pool so watched him winkle out 4 fish in as many casts to his new mayfly pattern, but this is still in the development stage. He wouldn't divulge how many fish a fly has to take to make it into his box. 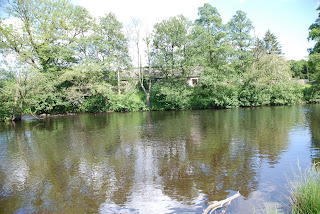 Where Bar Brook enters the Derwent. 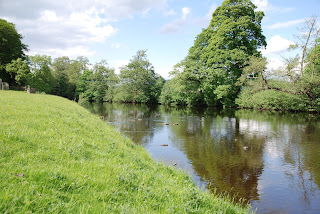 Looking up towards the deer boom from the previous shot. 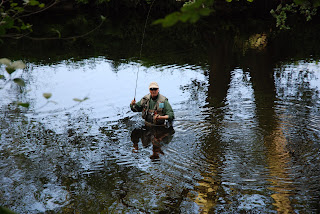 Derek with one of his fish to his new mayfly pattern

Tomorrow we are going to the gardens at Chatsworth to see the rhodedendrons so no fishing but I have Wednesday off work so Derek is taking me on the Wye, I must tie up some more mayfly duns as the fish soon mash the ones I tie. Thursday and Friday afternoons it's back to the Derwent as booked them off work too!.
Posted by Baslowfisher at 17:55:00