Met Derek and David at the works for a few hours. I went down to the Willow Pool but only managed a recent stocked "bluey"! The wind had changed direction and was coming from the north so decidedly chillier. Mozied up to the Sycamore pool where Derek was playing "silly bu**ers" with a submarine. 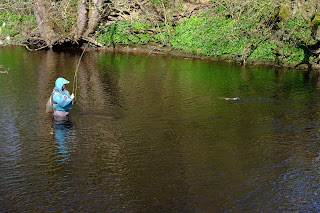 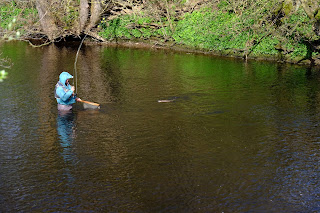 This was an over wintered fish and  not one of the recent stockies. I got in below him but after missing several only managed another stock fish. I noticed a few sedges (grannom)  knocking about but even changing to grey sedge did not proffer any response. The odd fish was rising here and there but nothing regular and to goodness knows what as there were no olives about either however loads of tiny midge so probably to them. Called it a day after a couple of hours due to the inactivity of the fish and me!
Posted by Baslowfisher at 13:44:00