On Sunday I decided to go above the works as the horse trial were in full swing in the park and I didn't want to get caught up in the traffic. I had my 10'6" #3 with me with the new Barrio line too. I went above the works to the sycamore pool where lots of fish were rising. I had a size 16 black gnat on and covered several of the rises, which were head and tail which I think indicates takes probably just below the surface, before a take and a brown was landed. Several more were covered without so much as a sniff so on went a size 18 black nymph on a curved hook with an indicator 6" above. 1st cast and another brown took and was landed followed by an oos grayling. I worked my way upstream taking a rainbow and 2 more browns. Strangely there were not many flies about apart from swarms of midges this afternoon however at 4.15 the temperature dropped quite considerably, the fish stopped showing as if a switch had been thrown and the swarms of midge disappeared. I called it a day by 4.30 finishing with 4 browns, 1 rainbow and 1 grayling.

On Tuesday it was a lovely warm day with a little cloud cover, after doing some gardening I went down to the fishing hut down Beeley. This is the first time I had been down there this season so was interested to see if the floods had changed the pools here too as further upstream there have been some major shifts of gravel and silt in the river. I got in at the pool above the hut and had on the same black nymph which did well for me on Sunday, I soon landed a bright wild brownie and this was followed by a grayling. I landed another lovely wild brownie before getting to the head of the pool. This area has certainly changed more gravel has been washed into the head reducing the size of the pool. I moved over behind the island as this always looks fishy, a decent rainbow took the nymph and was landed. I worked my way up and as the water was deeper I increased the depth of the indicator so it was around 2' now. Another lovely wild brown was landed before..... The indicator shot away and I knew I was into a large fish, at first i thought it was a large brownie as it flashed in the pool however after a minute I spotted a barbel! This was the first barbel I have caught in the 50 odd years I have been fishing, it had me all over the pool and all along I was  hoping the hook would hold. A size 16 206BL on 3lb tippet. At one point I am sure a second fish was following this. Eventually after about 15 minutes I landed it with some difficulty getting it into my net. 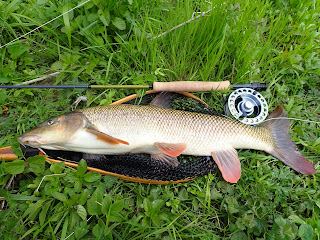 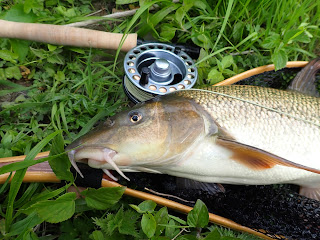 Following these photos and returning the fish I had to sit down and calm down as I was shaking! After this I couldn't concentrate so retired to the hut for a cuppa, Matthew turned up and I had to show him the result. I called it a day with 3 browns, 1 rainbow, 1 grayling and a magnificent barbel (by my standard).