None Fishin' this weekend!!!!

Didn't manage to get out fishing this weekend so just popped over the road to check the river this evening! The Derwent has now run-off since the recent flood but the bottom still appears to have a cover of brown slime in places. It is running higher than before the recent rains, its in superb condition clear as a bell. It was about 1900 when I checked but no fish rising or any fly about as the temperature had dropped.
Got an email from Stuart Croft confirming the sedges I sent him from April 17th were grannom. This is the furthest upstream they have been reported according to Stuart.
In an earlier blog I mentioned the 'Nana' fly and that the body was muskwash, according to Mr Google muskwash is another name for muskrat! Thank heavens my Nan did not realise that, then I suppose years ago they would not have sold many fur coats made from rat fur! Interesting to note that the fur I have is not the normal grey of muskrat but a fawn/light tan colour.
A photo from a recent outing, the brown having taken a small black parachute when there were black midges on the water. 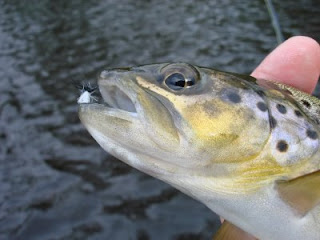