A Couple of Hours Above the Sycamore Pool 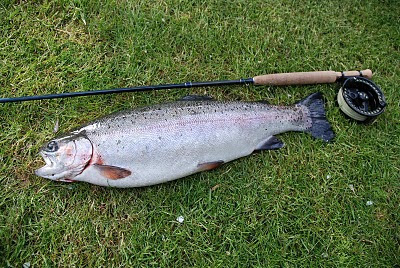 Finished my chores and so was able to get out for a couple of hours this afternoon. Weather overcast and chilly at first but the sun came out and the temperature rose.Went above the sycamore pool and there were quite a few fish rising so started with a LDO and got a decent rainbow within a couple of casts quickly followed by a good brown. There were lots of tiny flies about and the fish were just sipping the flies down. Must have been 2 flooks getting those as covered a load more fish but nothing taken. Switched to a size 20 caenis and picked up another brown, then again nothing. Decided to give a JT olive a run out and covered 2 fish and they both had it! Now I know this has probably surprised 1 or 2 of you as I rarely use cdc but this fly ceratinly had 'em! Used the frogs fanny on the fly after giving it a good wash between fish and that seemed to make the fly good as new. Note to self must try more cdc flies this season. Picked up another cracking rainbow 21" so decided to keep it. Fish were rising everywhere now but the few caddis which were knocking about were being totally ignored by the fish. I suspect they were taking some tiny emerger going by the slow sipping rise forms and nothing noticeable on the surface (I may be wrong here). Switched to a tiny size 26 greenfly as noticed quited a few on the surface and hit  a few but only landed 1 brown. Again a change of fly to a size 26 caenis type klink and hit quite a few fish but only landed another 2. Finished at 1700 with fish still rising and a tally of 8 fish for a couple of hours work! Hopefully the evening rise is just around the corner now as if I could have stayed I am sure the rise would have gone on for some time.

UPDATE - Just had Roger on the phone, he was taking his dog for a walk and crossed Baslow old bridge and noticed fish rising still at 2030 so maybe the evening rise has started, fingers crossed.
Posted by Baslowfisher at 19:49:00