Taken to the Cleaners and a bit of Father/Son Bonding

Friday Evening
Went over the road Friday evening at about 1930 as it had been a good day weather wise. There were several fish rising but again to the pain that is called greenfly! There were a few black gnats around with the odd sedge and olive. No matter what I did I could not get the little blighters to take, it's then that you start to think things like micro drag or fish stubbornly moving to your fly due the mass of naturals available. Needless to say I banked 1 brown and 1 rainbow. Sometimes when you are getting a bit cocky a difficult evening brings you down to earth. Trapped this olive, think it may be an olive upright? 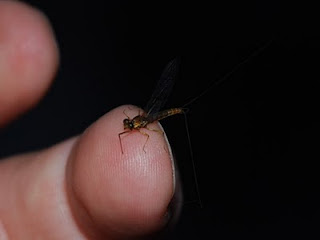 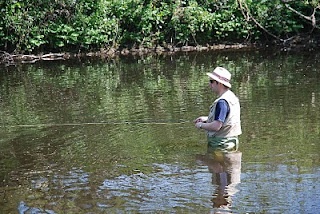 My son Adam decided he would like a day fishing with me, he did not come last season due to other interests! Anyway we decided to get out about 1230 and it was very hot so we headed down to below the works around the deer boom area as its usually a bit sheltered under the trees and fish can be found feeding here. Again there were masses of greenfly about and swarms of black gnats about. I tried a small black para and took a nice brown but it must have been a flook as nothing else would take. I noticed Adam into what looked like a good fisnh too! We moved down the pool and at one point I was literally a rods length from a smutting trout, taking the greenfly. No matter what I gave it it was totally switched on to them as I could spot them coming down the run and the fish just tilting to sip in the fly. I attempted a couple of photos but couldn't just quite get it right.By 1500 the fish had stopped rising and the heat had increased so we headed home till the evening. Adam did ok with 4 fish to my 3.
We went out again at 1930 down to the lunch hut at the bottom end. Again fish were rising to black gnat and greenfly but this time there were some yellow flies which looked sedgey but on further inspection I identified them as yellow sallies. Again I had to go down to a 26 and managed a couple of browns, this time they stayed on better as I had offset the hook point. Adam also took a couple of fish and the keeper remarked that he had seen him take a good size rainbow. I moved down to the pool below the hut and in the fast water noticed that a hatch of olives were on the go, I did not manage to trap 1 but they were very pale and probably BWO size so I assume they could be pale wateries as it is a bit early for BWOs I think. We fished on until 2145 and Adam finished with 4 fish and 4 fish to myself. A really enjoyable day with my son we should do it more often provided he isn't on the golf course!
Posted by Baslowfisher at 22:12:00

Colin
Nice post mate, at least you have sussed out they have been on the green fly mate, i have found this all over he rivers at the min..i have a pattern that has done very well for this, will bring some over when we get out, think that fly is like u say, a medium olive spinner..
Nice one
Glen