The day dawned a bit wet but I decided to go down to the bottom end after lunch so I arrived at the hut around 1330. The sun was trying it's best to come out and there was a distinct rise in temperature compared to the previous week. As nobody was down here I had a few flicks in the pool by the hut but only picked up some very small browns but encouraging that the fish are breeding well. I was keen to get down to the bottom but stopped off first in Max's bench pool. Unfortunately there was nothing rising so I took off my grey olive parachute and put on dark olive fsn. There were loads of yellow may duns coming off but even though they were taking an eternity to take off not one fish rose for them. I have yet to see one taken by a fish but I know some fisherman swear by them but not me! There was also the odd mayfly scooting about and I noticed several empty shucks floating by. I picked up another small brown as I worked my way up the pool and then near the run in at the top a fish was rising so on went the a grey duster type fly tied in the normal way, this is unusual for nearly 100% of the time I fish parachute style flies. Anyway as I approached it was still rising but could not make out to what specifically so I cast over it and up it came but in my eagerness I fluffed it however this did not put him off and he continued to rise. I cast again but nothing and on the second attempt the cast was short by a foot but up came a rainbow this time and gave me a real run around before being netted. 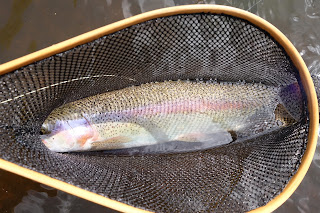 I now went down to the bottom an island had developed quite nicely over previous seasons with willow taking root. This area is a bit sheltered and more fish were showing here to a variety of flies including the odd mayfly. I caught a yellow fly which turned out to be a yellow sally, also some spinners were flitting about too. I worked my way up slowly picking up browns to a grey olive parachute and a large adams with a beige body (my nana fly!). 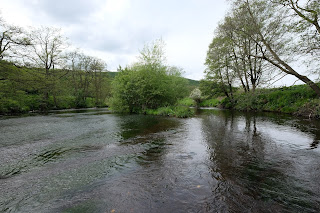 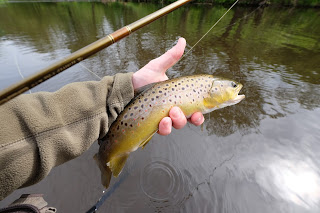 The final brown was a real stunner with a tail like a spade which was landed around 1630. I climbed out of the river around 1700 as the temperature was dropping and fish had ceased to rise. I finished up with 12 browns and the large rainbow. I met up with Derek at the hut who had also had a good day in the pools near the hut and cattle drink. 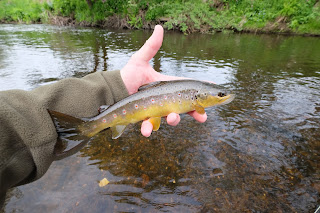