A Difficult Day and nearly a duck!

I invited my friend Roger (aka Derwentflyfisher) for a day on my stretch of the Derwent yesterday. We got down to Beeley about 1130 and the temperature was decidedly on the chilly side with a downstream breeze. There were a couple of guys having lunch and they said there wasn't much moving about. The riverkeeper was also there and he commented that he mayfly had been disappointing so far this season. We tackled up with mayfly nymphs and went in the pool above the hut. I pointed out the runs and holding spots for Roger as he hasn't fished this pool before. 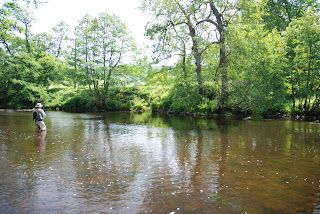 On the left had side of the pool there is a small run in where there are usually some fish holding and after a few casts Roger connected with his first brown of the day. There was a distinct lack of surface activity in this pool with only the odd fish showing here and there. Probably due to the lack of hatching flies, none! 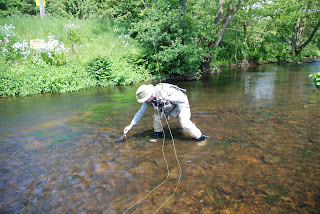 We went further downstream to another good pool where I showed the likely holding places and I continued downstream to fish the next pool down. I took 2 browns and a rainbow in the fast water at the head of the pool but again still nothing hatching to speak of. By now it was getting cold and I bid a hasty retreat to the car to pickup my fleece. On returning Roger had moved up to the next pool, He had taken another brown. I then got in where Roger had been and picked up another rainbow and a brown. The mayfly were still absent in any numbers only the odd one. I continued up the pool switching between nymph and dry whenever a fish showed but nothing more until I reached the next pool where I picked up another brown. By now its was time for a warm, Roger had gone to put the kettle on so I followed back to the hut. We had a final 30 minutes in the pool where we started but nothing. A real struggle of a day and all fish taken on either mayfly nymph or dark olive fox squirrel nymph. Roger seemed to enjoy it but I was disappointed that it had not been the day I expected. Maybe next time.

Went out Monday Evening for the last hour or so. Down to the Stump pool where there were a few fish moving. Plenty of LDOs and sedge about. Missed a few. Went up to the cricket pitch and fished up. Plenty of fish moving then a good hatch of BWOs came down like sailing ships and the fish attacked! I missed several and couldn't get to take properly, well thats my excuse. Tried varioius patterns then thought JT olive and 1st cast bang and stayed connected, a nice brown. Needless to say that was my only fish of the evening. It was still a chilly evening although there was plenty of fly about however about 2130 the usual thermometer was turned right down and the flies disappeared together with the fish. I called it a day retreating with my tail between my legs. You can't win em all!
Posted by Baslowfisher at 18:56:00

Great report...glad you had some productive time on the water!