A First Caught More than Derek!

Now, when  I go fishing with Derek I know that he is going to catch fish no question. Me its not always the case. Last evening we arranged to meet above the works around 7. I was late so Derek had already started. I got in by the sycamore as Derek was further upstream working his way up so I was picking up any strays he hadn't got, or so I thought. Anyway there were loads of fly about which surprised me as the evening was not even remotely balmy. I had a long sleeve shirt, a fleece and my waterproof jacket on just in case but yes there were flies aplenty. Small olives about, some sedges and tiny caenis types. Fish were moving and so you could pick which to cast to, brilliant. I cast a small size 16 olive to a few and had a couple of takes which did not materialise before landing a lovely 9" wild as they come brownie. This was quickly followed by another brown of about 1.5lbs. The olives were perhaps a tad smaller than the 16 I had on. Some of the fish could be seen chasing the sedge and I managed to trap a few in my net (sedge that is) and they were dark grey to black bodies with black wings so on went a black sedge I had with the pre-formed wings which I have blogged about last year and was soon into another good brown. At this point Derek had taken 1 but was having one of those sessions when nearly every take comes adrift. I was now showing him how to catch! The sun had now dropped over the hills and the temperature was also dropping all the time but still the fish rose. It was difficult to see what to now as olives were sailing past them but were being ignored. The only thing could be the caenis so I put on small 22 all white parachute a few fish had a swirl and then I covered a fish which had been showing quite a few times and bang he had it, another lovely wild brown with big black and red spots, lovely. It was just after 9 now and I was starting to shiver so I quickly worked my up to Derek taking another good brown on the way to the caenis. Derek was continuing to drop the fish off, just one of those evenings. I called it a day by 9.15 and left Derek to them as once you get chilled then thats it as far as I'm concerned. 5 loveley browns and a lesson for D, hee hee!

P.S. Rang Derek this morning and he stayed till nearly 10 but only managed 2 or 3 fish in total. He said it was only 7 degrees when he left, some winter day's being warmer! It is now nearly 7 in the evening and it has been pouring with rain all day here in the Peak District so with a bit of luck it may send a bit of a flush into the river. Don't think I'll bother going out this evening will tie some 18 pale olives. 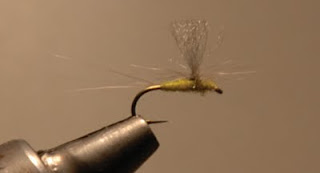 Nice fly, I bet that does the business?

Richard, I am going to try it tonight, will let you know.
Colin