I decided to take a half days hol so Icould fish the afternoon when hopefully the maylfy would be about. I arranged for Derek to pick me up around 1330  and we went down to the cricket pitch car park. We decided to fish up towards Bar Brook. Derek got in at the bottom and I made my way up to where the brook runs in. I had on a myfly nymph as there was the odd 1 about but not the clouds we are so accustomed to seeing this time of the year. Straignt away I had a take but the fish didn't stay on and then again on my following couple of casts all not developing into positive hook-ups. I checked my fly but the hook was ok so I changed the nymph for one tied on a standard hook. The previous had been on 1 of these patridge flat nymph hooks. Again I started getting knocks and was soon into a decent brownie. I quickly took another brown closely followed by a rainbow all in the 1.5 - 2lb class. My next take was not quite a 'aggressive' as usual and when there was very little fight I thought I may have hooked up on a piece of dead wood but no it was a small chub about 10". My first chub for a while and a tiddler as there are some really good chub in the Derwent. At about 1500 the breeze dropped and you would think there were not fish in the river as rises had certainly been conspicuous by their abscence. It was like a mill pond so the nymph stayed on but I switched to a small dark olive fox squirrel as a few small olive were about but not enticing the fish to rise. Derek came up from the bottom end to fish up towards the deer boom as there is a deep hole there, but surprise surprise I had taken more fish at this point as Derek had persisted with the dry. Derek soon was into fish using a mayfly nymph and took a really good rainbow pushing 4-5 lbs. This is it putting a bend in his rod. 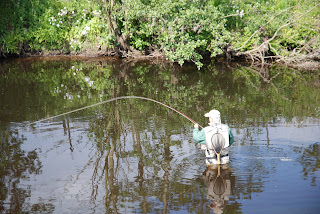 I got into the river to take a photo but Derek had netted it head first and the hook had dropped and then the fish squirmed out of the net and was gone. I went down to fish the cricket pitch and took a couple more browns and a rainbow making 5 browns 1 rainbows and a baby chub. We called it a day just after 5.
﻿ 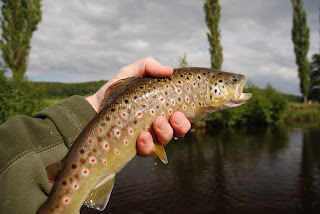