As the wind was dropping now I decided to go down to Mary's Bower in the park having a cast at the willow stump on my way but nothing doing there. The odd fish showing by the bower, then Matthew the river keeper came down, told me Derek, Don and David had been there and fished up to the deer boom all day, brilliant no wonder there wasn't much doing. If there were ever 3 fisherman you would not want to follow up a river it is these guys, all great fisherman and friends. Thought might as well pack in now! After a chat decided to move up swiftly only casting to rising fish, nothing. Put on a sedge pupa by the willow stump and got a lively rainbow. 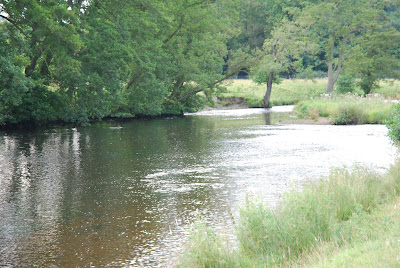 Made it to the cricket pitch by 2030 then the fish started to put in an appearance, sedge everywhere with the occaisional rusty spinner, changed the nymph to a rusty spinner and picked up a decent brown. Started covering loads of fish but they were not interested in the spinner anymore so on went a size 18 brown sedge and immediatley started to rise fish although they were only on then off! A massive "swarm" of sedge came downstream dragged by the brreeze and I quickly wafted my net through it and caught a few. These were pickled, when I got home, like the one from last week and are now on their way to Stuart Crofts, I think they are silverhorns. Managed 4 more decent browns all to the brown sedge before it was too dark to see.
Overall not a bad evening considering the initial report.
Posted by Baslowfisher at 20:28:00

I met Stuart the other week in Sheffield, a real down to earth character who knows his onions.
Thats Stuart on my blog below the wier at the rivers Champions conclave (city life)
Anyway when are we fishing, how about tomorrow at Wolfscotedale or even a day on the Wye this Wednesday, or better still both.